Short film script, “Lift Share”, written by Virginia Heath and Stella Heath Keir, is now in edit, after shooting in Outer Hebrides and Edinburgh for 6 days in early September 2017.  Produced by Grant Keir, the short is financed by Scottish Film Talent Network, Faction North Ltd, Kolik Ltd, An Comhairle (Western Isles Council) and received sponsorship support from Arnold Clark Rental and Calmac Ferries.  The film stars Ana Ularu and Mark Rowley (see photo above) as two strangers who meet through an online lift share website: a young Romanian woman in search of a child that was forcibly taken from her and a Scottish musician returning to the Isle of Harris to face up to the death of his estranged father.  As they drive the long miles from Edinburgh to the Outer Hebrides, they gradually challenge each other to reveal their real reasons for making the journey.  As they approach the ferry that will take them to the islands, his crisis of confidence forces her to think again about her future. 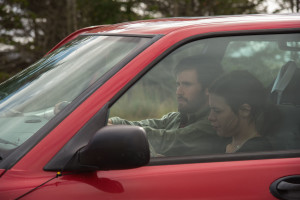 Alone amidst the haunting beauty of the Scottish wilderness they find escape, emotional truth and understanding, enabling them to face the past and move on.