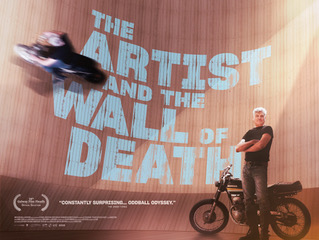 The unlikely story of a Glaswegian visual artist, Stephen Skrynka, and his dangerous life-long obsession with riding the ‘Wall of Death’. Stephen dreams of transforming the traditional fairground motorbike attraction into an art form, but underestimates the difficulties of combing his artistic vision with the commercial instincts of his collaborators. Alone, with no finance and a pandemic raging, Stephen rashly decides to hand-build his own Wall out of recycled wood. Facing a crisis of money and self-belief, salvation arrives in the shape of unexpected comradeship, anonymous donations and the kindness of strangers. Stephen builds his Wall. But can he ride it?

The Artist and the Wall of Death’ is a story of second chances, of art vanquishing death, of embracing failure and of unfinished business. Financed by Screen Ireland, Screen Scotland, the Broadcasting Authority of Ireland, RTE, BBC Scotland the film is a John Kelleher Media & Faction North co-production, produced by John Kelleher, Grant Keir and David Power. The film had its World Premier at Galway Film Fleadh 2022.